The allegorical figures of Day and Night are some of the most beautiful to be found with regularity among cameos that have come to us from the Victorian Era.  Because there are so many variants, they are taken up here in three sections: the figures in solo turns; the two together in jugate compositions; and the full figures of Bertel Thorvaldsen's reliefs.

Radiant Day, wreathed in flowers, her companion, a bird carrying a cornucopia filled with the flowers that open as she shines down upon them.  Click on photos to enlarge.

In most renderings of Day, the torch-carrying bird has the beak & head of a dove.  But in clutching the cornucopia, which probably started out as a torch, it closely resembles the eagle often seen gripping the thunderbolts of Zeus, and occasionally carvers did place a Jovian eagle in the forground, as seen in the fourth picture of the fist gallery above.  Occasionally examples are seen in which the carver has placed thunderbolts in the bird's talons.


A popular, frequently very beautiful cameo composition shows both figures together, juxtaposed one behind the other, in a jugate arrangement.  While Day is virtually always in the foreground, with Night snoozing behind, carvers made various decisions as to which other of the traditional elements to include.  Space available and the carver's degree of skill no doubt played a part in these choices.  Some included both birds:  Click on photos to enlarge.


Cameos with only one diurnal bird may feature either a dove-like creature or one that is clearly an eagle, sometimes even one bearing the thunderbolts of Zeus, rather than the cornucopia of morning flowers borne by its more peaceable cousin.

The occasional maverick did give the owl pride of place. 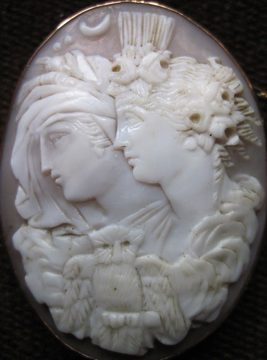 Instead of a bird, Day may have the Genius of Light, a small Cupid-like figure bearing a torch, to accompany her.  The little imp appears in a variety of poses.  Click on photos to enlarge.

Rather than a bird, Bertel Thorvaldsen's relief sculpture of  Day carries along with her an impish figure, generally know as the Genius (spirit) of Light, who holds aloft a torch.  Click on photos to enlarge.


His Night tenderly embraces two sleeping children, carrying them home to bed.  She is not veiled, but does wear a cap—a nightcap?—which some carvers turn into more of a Phrygian cap.  There is no ambiguity about her avian companion.  This poignant image has been used on the gravestones of children; it would have been a natural choice for mourning jewelry.  Click on photos to enlarge. 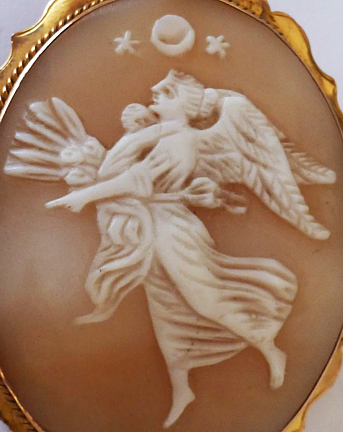 Despite her similarity to Thorvaldsen's Night, this figure, available to subscribers, is not she.