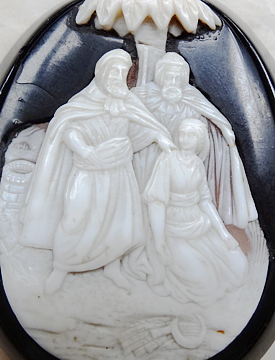 This scene appears with some regularity on cameos being offered for sale, but it is only occasionally correctly identified as depicting the Biblical figures Ruth and Boaz, the forebears of King David.

Due to famine in Israel, Naomi and her husband move to the non-Jewish land of Moab.  Their two sons each marry a Moabite woman.  One of these is named Orpah (according to Oprah Winfrey, her name is a misreading of Orpah), the other is Ruth.  In time, all three women are widowed.  Naomi tells her daughters-in-law to return to their families.  Orpah does so.  However, Ruth has become so impressed by her mother-in-law that she refuses to depart, instead converting to Judaism herself and declaring: Whither thou goest, I will go.

Where they go, eventually, is back to Israel.  To earn a living, Ruth takes work gleaning wheat--picking up the stray ears left on the ground after the main harvest is finished--in the fields of a kinsman of Naomi's named Boaz.  The book of Ruth is a whole disquisition on land transactions and levirate marriage.  Suffice it to say, Boaz is taken with this beautiful field worker and they are married after those with prior claims relinquish them.

We have not yet been able to identify the original of this composition.  There is the possibility that a talented carver reduced a more expansive painted version into one that would fit within the confines of an oval cameo.  It seems unlikely that this work by the Scottish painter John Faed would have been known in Naples, but it is representative of  a typical rendering of the theme: Ruth on her knees in a vast field of wheat; the landowner Boaz and a retainer coming across her. 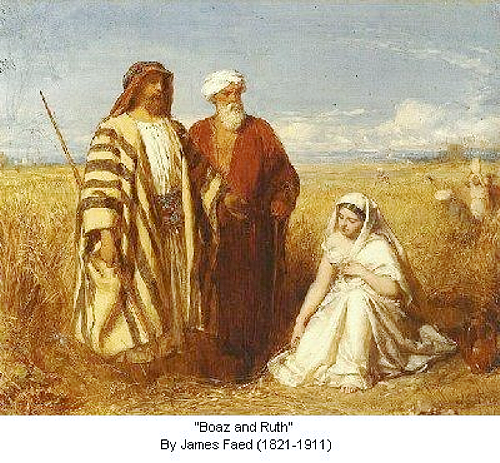 The main clue to the subject given in the painting, besides the garments of the figures, is the wheat field itself, running all the way to the horizon.  Restricted in the space and colors available, a cameo must use other means to signal its meaning to the viewer.  Although gleaning does not involve the use of a sickle, the presence of one in the cameo composition tells us the woman is in a wheat field.  The cameo at the top of the article includes a palm tree, a conventional way of indicating a scene is in the Middle East; the style of the clothing places us in Biblical times.  (See also Rebecca.) 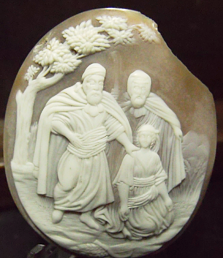 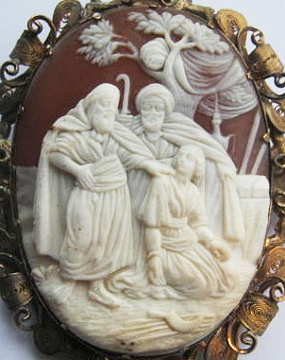 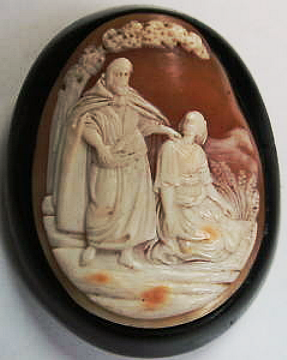 The carver of the first cameo above put in the background a generic tree of the type seen in most country village scenes.  The second has hints of luxury in the sheer drapery swagged from the trees, offering shelter from the sun.  There is an exotic lidded vessel as well, suggesting costly scents and unguents.  We are on the land of a wealthy man.  The third cameo has been pared down in its elements but is still recognizable.  In all of the cameo representations Boaz is doing something he never would have done as a virtuous Jewish man, touching a woman to whom he is not related.  However, the gesture is one of selection: "I choose you."  Another clue to the meaning of the scene. 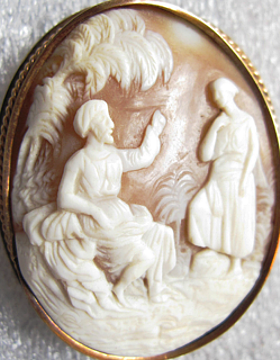 It is likely that the cameo at the far right is another depiction of Ruth and Boaz.  In this version, as the master, Boaz sits, while Ruth, the servant, stands.  The palm tree and the man's turban signal a Biblical scene.  Here we can imagine that Ruth is saying, "Me?" and Boaz is replying, "Yes, you." 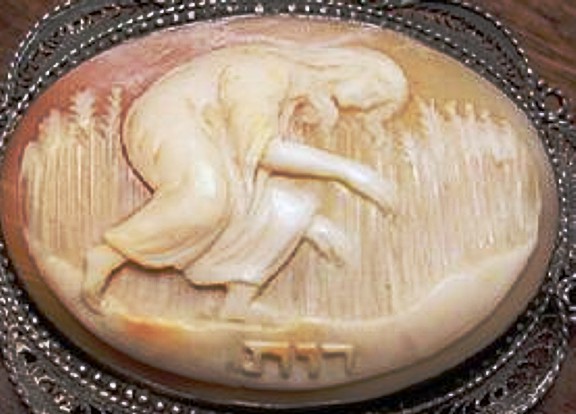 And here is Ruth by herself, in a more accurate portrayal of what it is to glean—backbreaking labor.  Her name is written in Hebrew below her.  This, together with the style of the silver frame, indicate the cameo was made by one of the artists of the Bezalel School in Jerusalem. 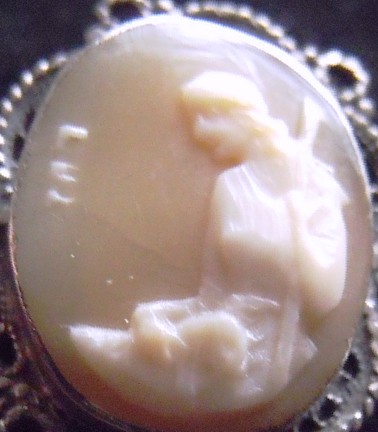 The tiny cameo on the left, shown here larger than actual size, features a kneeling figure who could be taken for Ruth, if it were not for the fact that rather than holding a sickle, in her left hand she holds a shepherd's staff, while her right hand is stroking the lamb with its head in her lap.  In case there is any doubt, her name, Rachel, is written in Hebrew at the edge in front of her.  Another of the great Biblical matriarchs, but not Ruth.  Although not so marked, this is undoubtedly another Bezalel piece.