The story of Rebecca is told in the Biblical Book of Genesis, chapter 24. Before he dies, the patriarch Abraham wishes to see Isaac, the only son born to him and his wife Sarah, married.  However, Abraham and his household are living among a foreign people, the Canaanites, and he wants Isaac’s bride to come from their own people.  He commissions the most senior, the most trusted, servant of his household to make the journey to his homeland and select a suitable virgin.  This servant has traditionally been understood to be the same steward of the house mentioned in chapter 15, verse 2, named Eliezer. Although the name never appears in chapter 24, Eliezer, as we may as well call him, takes ten camels and sets out for the east.

He arrives at Abraham’s natal land at dusk, when the women come to the well to draw water.  There is one very beautiful maiden whom he asks for a drink of water.  She speaks to the elderly man courteously, not only giving him a drink from her pitcher, but watering all ten camels as well.  Taking this as a possible sign that God intends his errand to succeed, he inquires who her family are and if it would be possible for them to put him and the camels up for the night.  Of course it is.  When he reveals the purpose of his coming, the girl is willing to go with him (the gold bracelets and earring he gives her may have something to do with this).  Her brother and mother are also agreeable, and so Isaac gets a wife.

Many cameos are identified as being Rebecca at the Well, but most of these might more accurately be titled Country Scene with Woman at Well (or Well House). 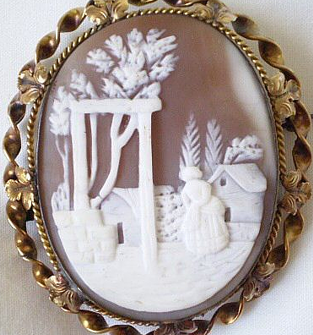 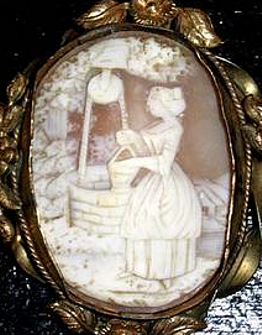 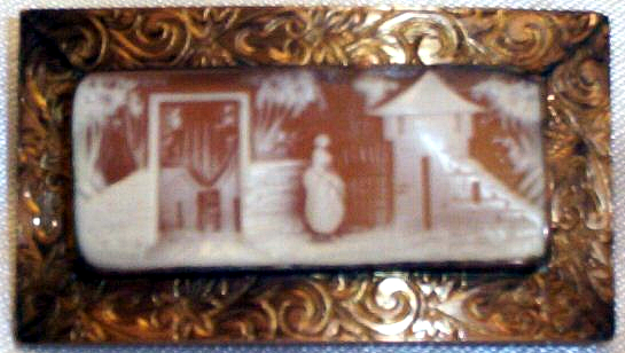 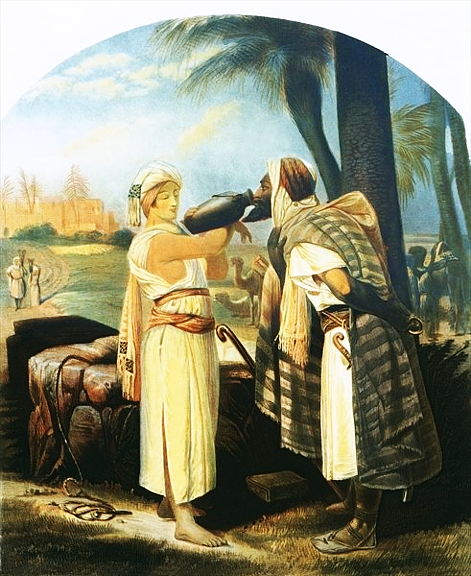 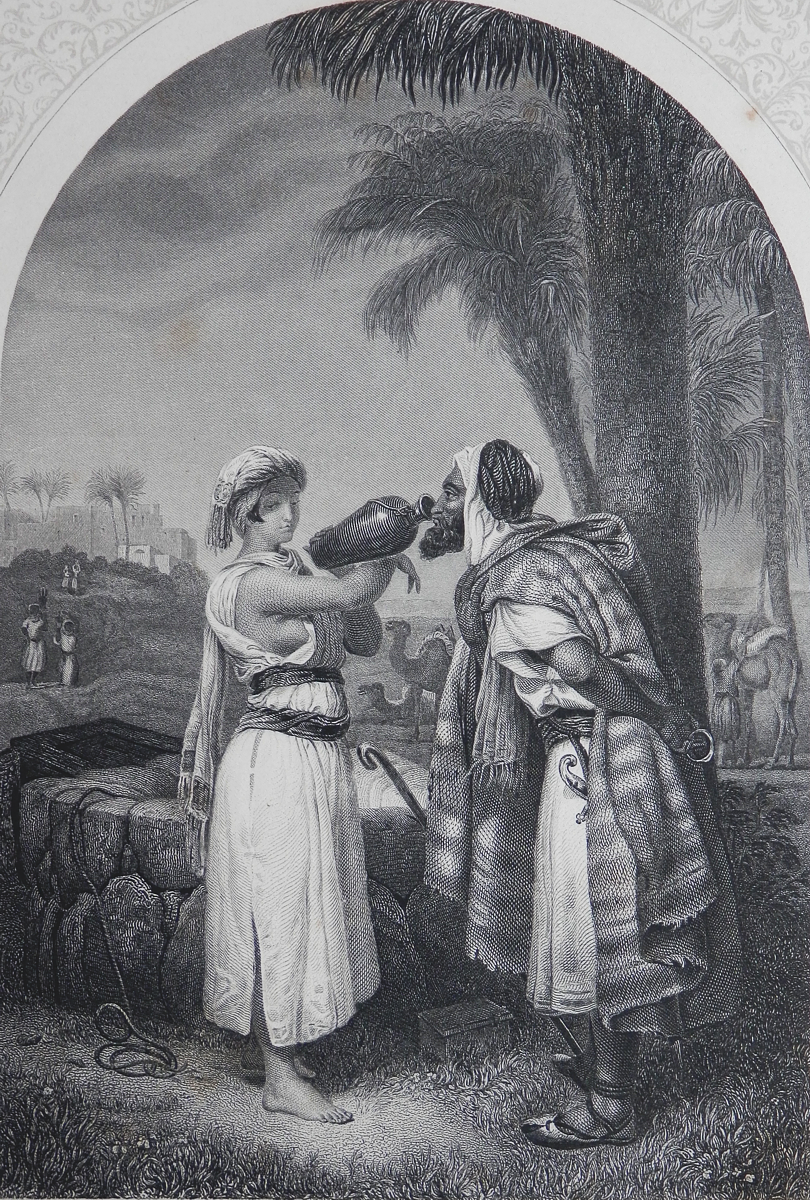 True, unequivocal depictions of this scene include the aged emissary, and the bride-to-be is not dressed in fashions of the 1800s.  The most commonly seen version is based on a painting—although carvers more likely saw prints—by the French artist Émile Jean Horace Vernet. 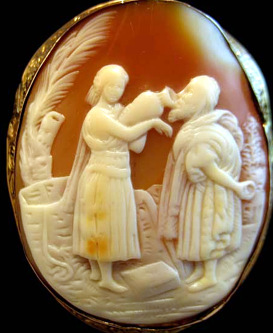 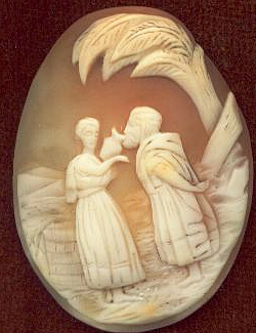 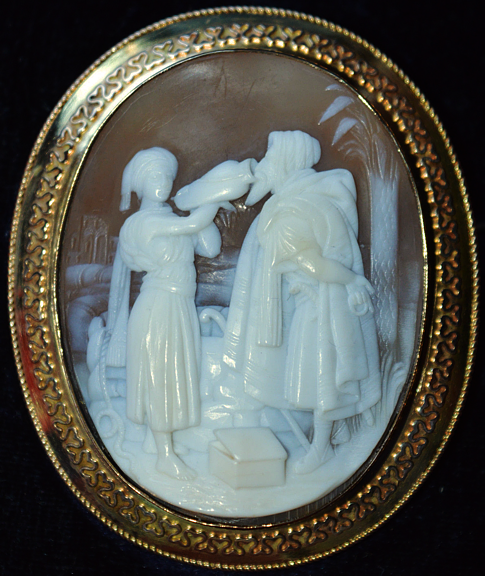 Note also the stoniness of the ground, the palm tree and Eliezer’s posture.  Only the carver of the second cameo perceptively portrayed an old man bracing his stooped back with his arm. The other two picked up on the arm position, but not on the reason for it.  In three of the cameos, as in the painting, there is a box on the ground next to Eliezer; the bracelet he is hiding behind his back, most visible in the second cameo photograph, tells us what is in it.

In the painting, Rebecca is using her right arm to support what would be a very heavy clay jug full of water, as she holds it up and tips it toward Eliezer's mouth.  To varying extents, this is lost in the cameo versions, with the right arm raised to no particular purpose, suggesting that many of these cameos are copies of other, inaccurate, cameos, rather than having been cut with a print of the painting before the carver as he worked.

The first cameo below is the very rare case of Rebecca shown alone. The stony surroundings, the well itself, the palm trees, and, above all, the camel in the background serve to make the identification. The second figure has somewhat the same look, with the two vessels.in the scene.  However, she is garbed as a sibyl, taking her out of the realm of the Biblical.  Indeed, she is someone quite different and will be appearing in a future article. 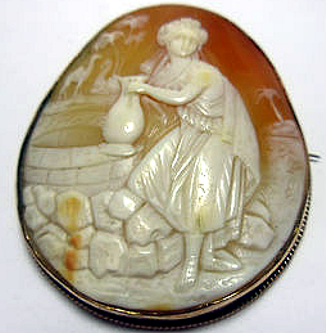 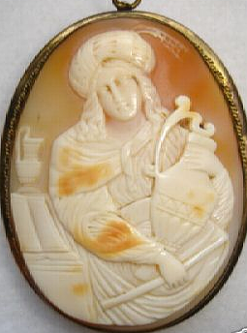 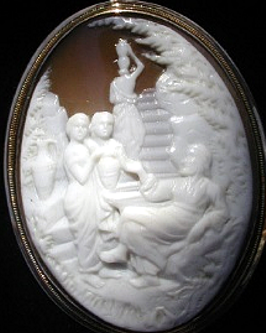 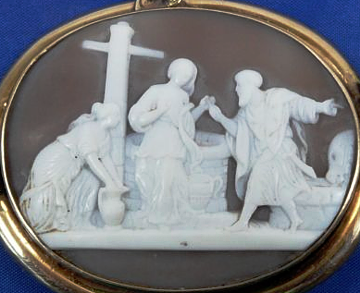 The scene on the right may be Eliezer waiting by the well, watching for a likely prospect to appear.  It is not clear whether one of the women he sees is Rebecca, as Rebecca is not described as coming with a friend or maid servant.  However, the cameo to the left surely shows Eliezer requesting water from one of the women.  In this context, the animal seen to the right, though it might readily be taken for a horse, would be an attempt by the carver, who may never have seen one, to render a camel. 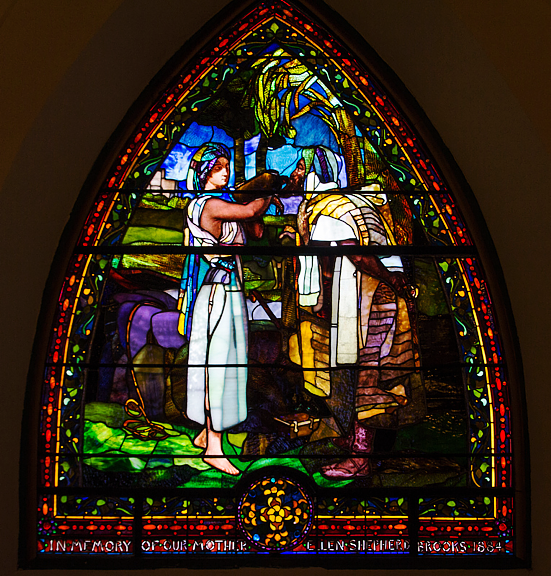