Among the first generation of Olympian gods, Hera/Juno is both the sister and the wife of Zeus/Jupiter (Jove).  While she is the consort of the King of the Gods, and certainly a force to be reckoned with in her world, this goddess is a bit second-string in the cameo realm.  Although traditionally associated with marriage, the home, etc., most tales about her concern her reprisals against those nymphs and mortals who catch the eye of her philandering husband or her various attempts to thwart his will.  It is perhaps because of this that the Queen of Olympus does not appear with the same frequency as Psyche, Ceres/Demeter, Hebe or the Graces on jewelry chosen by proper Victorian women.  Evidently, the Romans also did not hold her as among the highest influences in human affairs: they did not name a day of the week for her.

She is mature, wears a diadem (some would insist a polos, but this cylindircal headgear is rarely seen in cameo representations) and frequently the small veil at the back of the head, an occipite.

Add a few stalks of grain, and most images of Hera/Juno could just as well be Demeter/Ceres; it is a bit of a default identification. 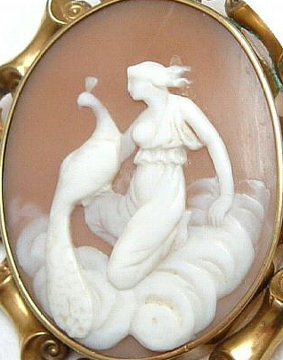 But the goddess does have one attribute exclusive to her.  Like most of her Olympian colleagues, she has a creature that is her servant and companion: the peacock. 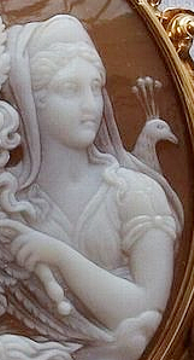 A regal  bird, to be sure, but not always as showy as in our time.  Among her husband's many conquests was the nymph Io.  To hide his paramour from his spouse's jealous eyes, Zeus transformed Io into a white heifer. But Hera, suspecting the trick, asked to have the beautiful snowy heifer as a gift.  She then set the hundred-eyed giant Argos (Argus) to watch over the poor bovine Io.  Zeus sent Hermes/Mercury to the rescue.  When his attempt to lull the guardian to sleep failed, Hermes was forced to slay Argos.  In recognition of the giant's service to her, Hera set his eyes in the tail of the peacock.

As Zeus's chariot is drawn by eagles and Hermes serves him as messenger, so peacocks draw the car of Hera/Juno and Iris, who travels back and forth between the heights of Olympus and the earth below on the arc of the rainbow, frequently does the supreme goddess's bidding.  This engraving, in the British Museum, is based on a painting by Francesco Albani, and shows Juno and her entourage. 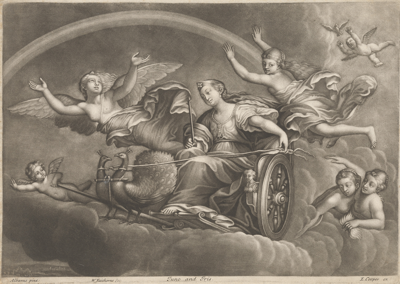 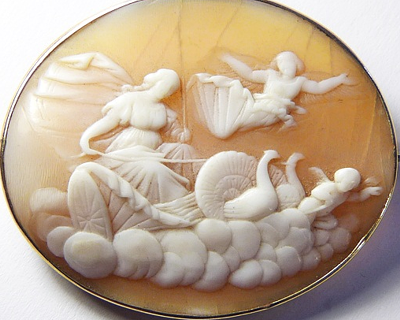 And in a more casual moment: