A scene that is easily confused with Phaeton is the allegorical one of The Genius of Peace Halting the Horses of Mars (La Génie de la Paix Arrêtant les Chevaux de Mars), based on the painting, now in the Musée de Genève, by Bénigne Gagneraux.  The Genius, embodying the spirit or essence of Peace, is depicted as a winged youth, head wreathed in what is probably olive, drawing on nearly invisible reins to check the four plunging horses of the God of War and Battle Lust, Mars (Ares in Greek).  He is succeeding; hoof marks can be seen on the ground in front of the current position of the horses' hind feet.  Gagneraux captures the force needed to drag the animals back in the steep angle of the young man's body. 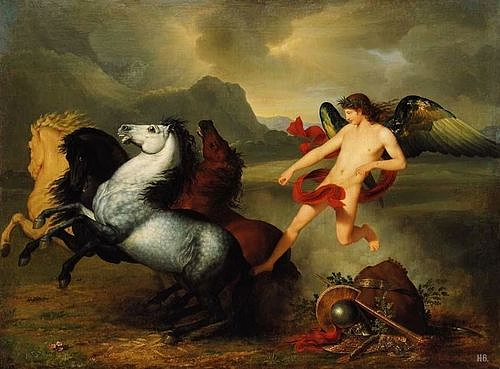 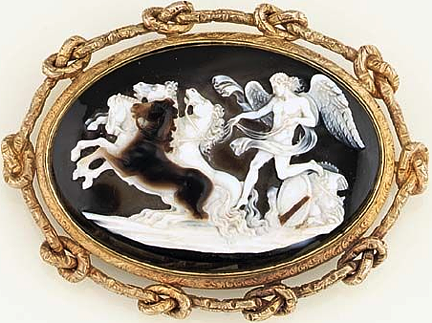 Going beyond Phaeton to his father, Christie's identified the subject as Phoebus-Apollo in their auction listing for this cameo by Luigi Michelini.  They also speculated that Michelini may have based his work on the Saulini piece shown below.  However, as the Michelini is dated 1840 on the back, while the Saulini is believed to be contemporary with its setting, created in 1880, it would seem that the influence ran in the other direction.

Michelini did not reproduce the painting in exact detail.  A comparison of the stance of each horse with its position in the team reveals that they have been rearranged.  Some significant alterations have been made to the pile of cast aside armaments.  Now in the front there is a shield propped against the helmet and cuirass.  In the painting there does appear to be a shield, but it is lying flat on the ground, behind the other armor, its face invisible. The torch lying on the ground and only dimly visible in the painting (or in the reproduction; this article was written without the benefit of seeing the painting directly) is now shown prominently in front of the shield.  The cameo medium does not lend itself well to creating the illusion of dimensionality to elements that are horizontal to the viewer's sight; it was necessary to make the shield and torch vertical if they were to be seen and recognized. 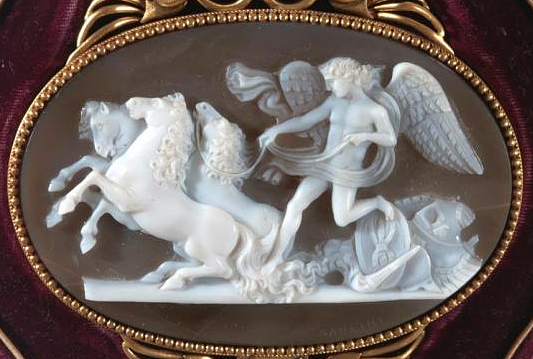 Either Tommaso or Luigi Saulini is believed to have carved the cameo in this pendant in the collections of the Birmingham Museums.  The Saulini cameo is somewhat less faithful to the original than is the Michelini.  Peace is reining in only three horses, not four.  An exact reproduction of the painting would have produced a cameo with an atypical, unpleasing, ratio of width to height.  Michelini overcame this compositional issue by using an additional color layer of his stone to place a fourth horse in front of the others, folding in the genius's left wing a bit, and making the figure, the shield, and the torch more upright.  The Saulini combines the two horses that are at the center in the Michelini into a single horse and pulls the Genius's right wing even closer to the face.

Although the Genii are nearly identical, they are subtly different.  Having made the figure more vertical in order to compress the scene, Michelini still managed to convey the effort being exerted to control the horses; his more narrow waisted figure has the V-shaped torso of an adult male and is throwing his weight back at the hips.  The Saulini figure, with a more youthful build, appears to be running along with the horses rather than straining to check them. This may contribute to the inclination to see the scene as one of Phaeton.

This cameo retains Michelini's arrangement of armor, along with the fallen torch.  What is clearly visible in this photograph of the Saulini is the device on the shield.  It is a stylization of the thunderbolt of Jove/Zeus, and such a shield is to be seen on many engraved gems, borne by the god Mars/Ares.  In case the viewer was not familiar with the painting, here is a clue to the meaning of the scene.  (The one available image of the Michelini piece is not sharp enough to show whether or not that carver was the originator of this feature.  The Saulini follows the Michelini so closely, one has to suspect so.)

The Saulini version must have been the one known to other carvers. While they added their own variations here and there, the compositions are more like Saulini than Gagneraux or Michelini. Some carvers placed the scene in the clouds, rather than on the ground or substituted a fig leaf for the scarf.

In their splendid book, Jewellery in the Age of Queen Victoria, Charlotte Gere and Judy Rudoe identify Birminham's Saulini cameo as Phaeton, seeing the fallen torch as symbolic of the boy's fall from the heavens.  But cities can be put to the torch just as human beings can be put to the sword; fire is perhaps an even more devastating weapon of war than the blade.  A torch that is dropped to the ground is soon to be extinguished.  The identification of these cameos as either Phaeton or Apollo must surely be discarded, not for their strong resemblance to the painting alone.  Neither god nor son is ever depicted as having wings.  Nor is either ever seen wearing armor.  Phaeton sets out driving, then later is blasted from, the Chariot of the Sun, nowhere here to be seen.  And why would it be, when the warfare being halted is terrestrial, not celestial?