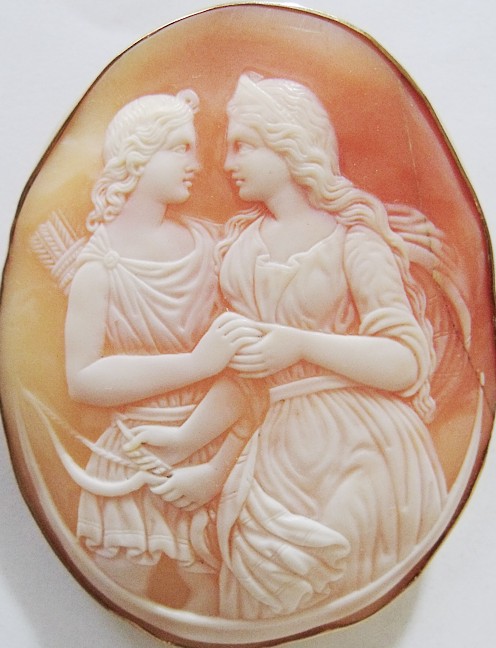 Diana/Artemis is goddess of the hunt, but also protector of wild things, the maiden sister of Apollo.  Other names for her, in her aspect as the moon goddess, are Luna/Selene and Phoebe, the counterpart to her brother, who is called Phoebus in his aspect as god of the sun.  By extension of her role as goddess of the night, she is also associated with Hecate, who might be thought of as the Underworld aspect of a trinity with power on earth (Diana), in the heavens (Luna) and in the subterranean realm (Hecate).

Diana's attributes are a crescent moon on the brow, a bow, a quiver of arrows and hunting hounds.  It is the rare piece that gives her all of these; the crescent moon alone suffices to make the identification, as long as it is not in the air above her, when the figure is more likely to be Nyx/Night. 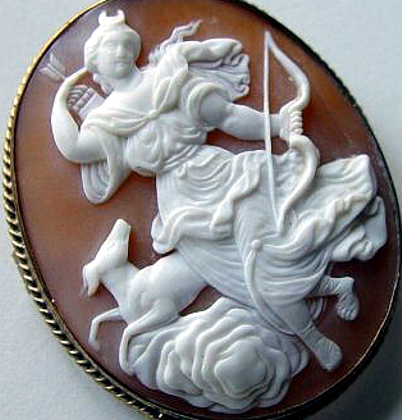 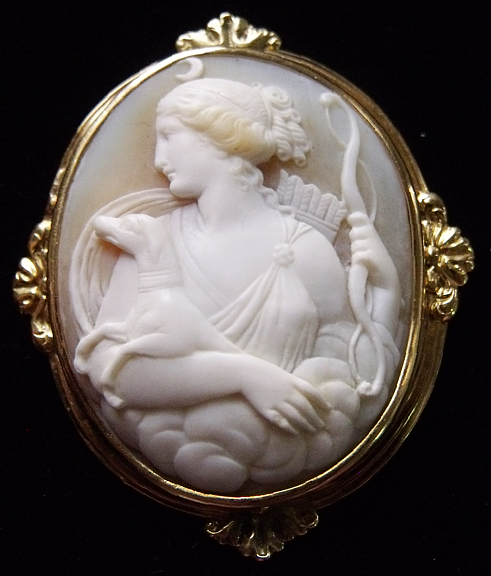 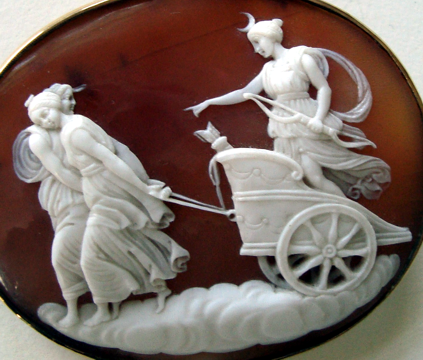 The bow, often seen only with the tip showing over one shoulder is also a clear identifier. The fletched ends of the arrows in her quiver peeking from behind can sometimes be mistaken for lyre strings. Although not exclusive to her, the strap for her quiver crossing her body is sometimes another clue to her identity. In her aspect as Luna she is the personification of the moon. We see her in the role of Luna when she represents lunedi—Monday—in Days of the Week bracelets, being drawn in a chariot by two female figures whose identity is open to conjecture. (See Days of the Week.)

Diana can be sweet or grave, stately or dreamy: 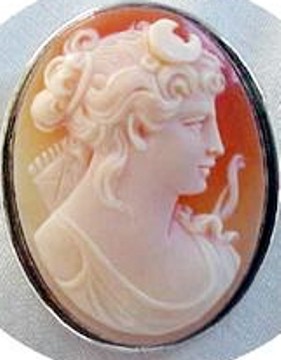 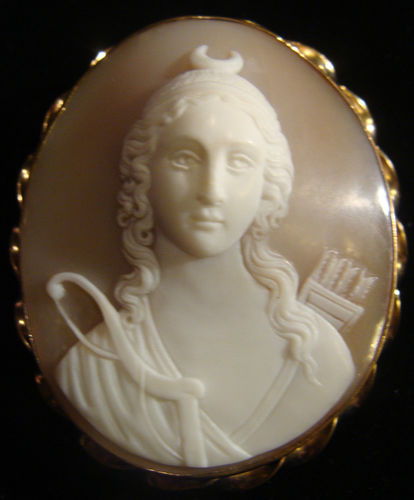 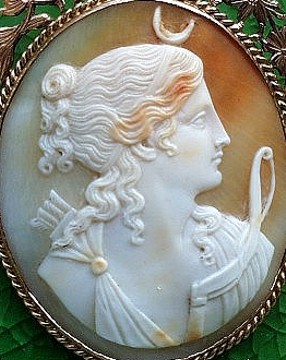 Diana is perhaps depicted in a greater variety of ways than any of her cameo sisters, both as an individual figure and in complete scenes.

While we may think of her as the gentle protectress of forest creatures, she can be a very formidable adversary, if you have caught her and her nymphs bathing in the forest.  Stories differ, but whether by accident or design, Actaeon comes upon the goddess disrobed for her bath.  It is always perilous for mortals to see divinity unveiled.  Cupid leaves Psyche when she violates her oath never to try to see him.  Semele, mother of Dionysus, is struck dead at the sight of Zeus in his full splendor.  Diana punishes Actaeon by changing him into a stag and having his own hounds run him down and tear him to pieces. 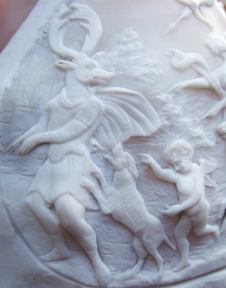 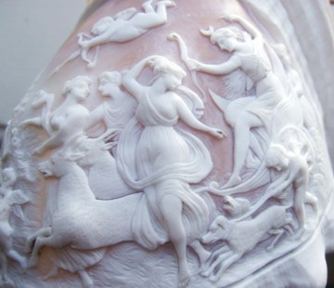 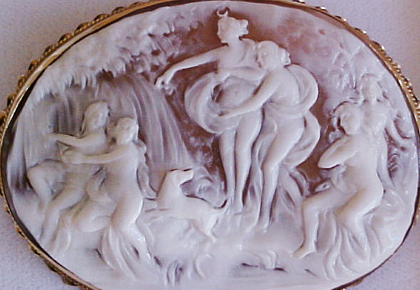 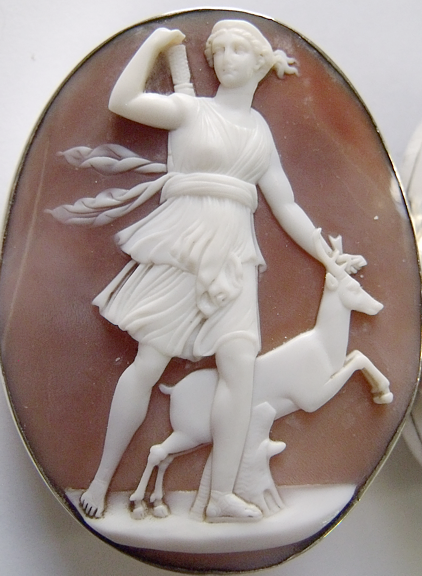 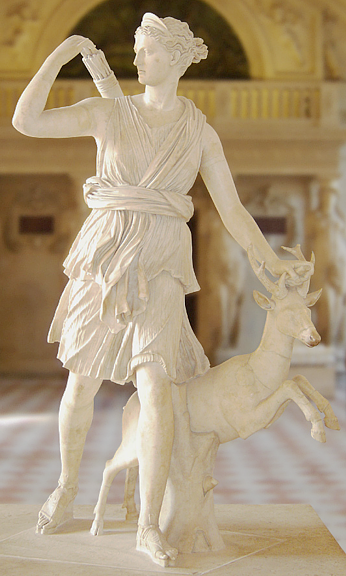 The Diana of Versailles is one of the most famous representations of the goddess engaged in the chase. 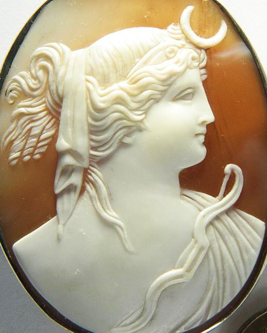 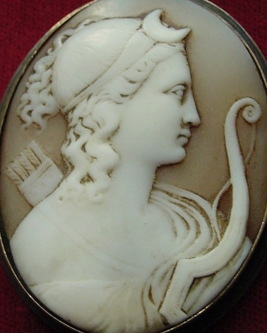 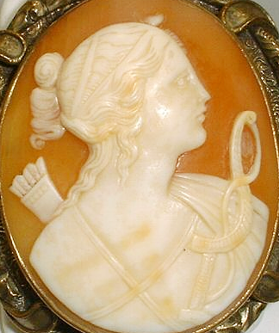 She can wear her hair with the occipite veil of a matron (first photo) or gathered high in the style Pausanias tells us indicates a virgin. 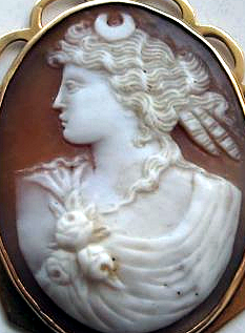 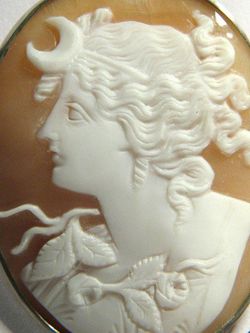 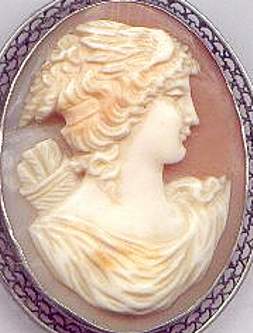 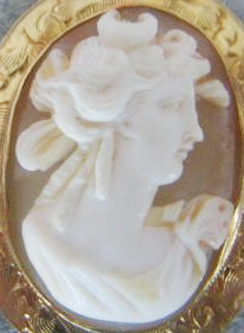 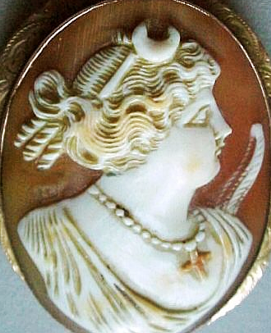 Sometimes carvers gave the goddess attributes not her own.  Here she can be seen, left to right, with the wings of Nike, the butterfly of Psyche, and, apparently, converted to Christianity (and not looking too happy about it.)