As the goddess of the Dawn, the attributes of Aurora/Eos are: a torch, symbol of light, either carried by her or for her by a companion; the eagle, which hunts by day; the flowers that open with the early sun; a vessel for pouring out dew; and the morning star. The torch may be carried by the eagle or by the Cupid-like figure known as the Genius of Light. Instead of a torch, the eagle sometimes carries a cornucopia of flowers; the torch and the horn of abundance are very similar in appearance. At some times she travels by chariot, at others, on feathered wings. Occasionally she has a radiance surrounding her, similar to Apollo’s. Her activities occur in the sky, indicated by clouds.

Sometimes Aurora can be recognized by the company she keeps. This is true in the well-known fresco by Guido Reni of Phoebus Apollo and Aurora, in which she leads the procession of the Chariot of the Sun as it traverses the arc of the sky. Here she has shining Phoebus himself, the Hours of the Day and the Genius of Light following in her train, as she leads, bearing roses. 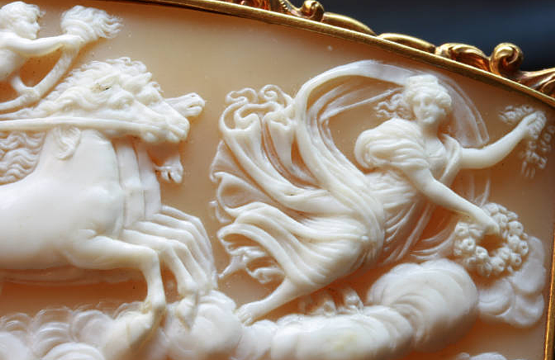 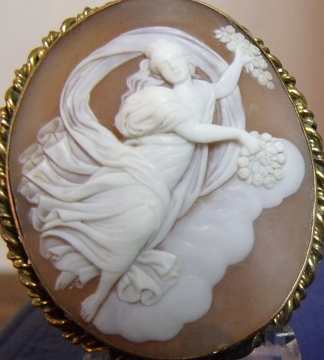 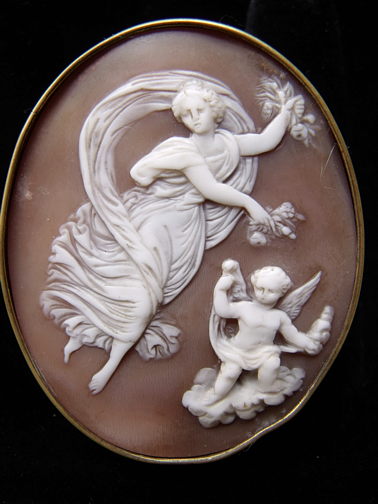 The carver of the cameo just above, on the right, found a way to include a repositioned Genius while staying within the conventional oval frame.

She is also seen in her own chariot, which, unlike the quadriga of Apollo, is usually a biga, with two horses. In this fresco by Il Guercino ("the squinter", Giovanni Francesco Barbieri), Aurora has a retinue of birds, genii and Hours. Flowers appear at her command. Her horses are both dark and light. 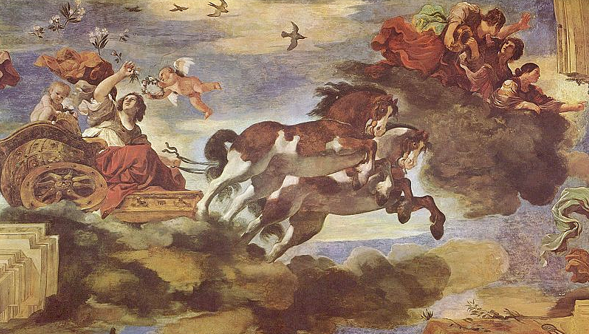 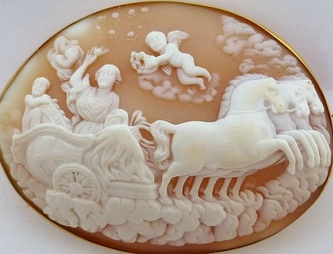 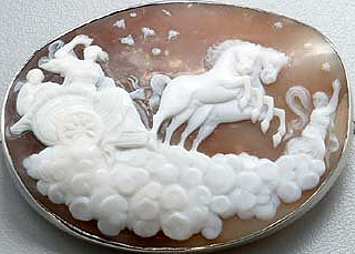 The figure who leads the way for Aurora, as that goddess does for Apollo, tends to be cropped out in reproductions or shown at an angle that makes her very difficult to see well. The edge of her skirt and scarf are just visible in the reproduction of the fresco, above. Although he was kind enough to include her in the scene, the carver of the second cameo above substituted the morning star for the torch Guercino’s figure carries aloft.

In this copy of Guercino by Tomaso Bigatti we can see not only the leading figure, again with the morning star instead of a torch, but also some of her sisters (the Hours are available to registered users) as well as, on the far left, Tithonus, once such a beautiful young man Aurora abducted him and asked Zeus to make him immortal.  Her petition was granted, but—the twist in the story best remembered—she did not think to add in a request to give him eternal youth.  The fresco shows the goddess leaving her aging lover behind for the day.  The carver of the cameo adapted to his spatial constraints by giving a slight downward curve to the procession. 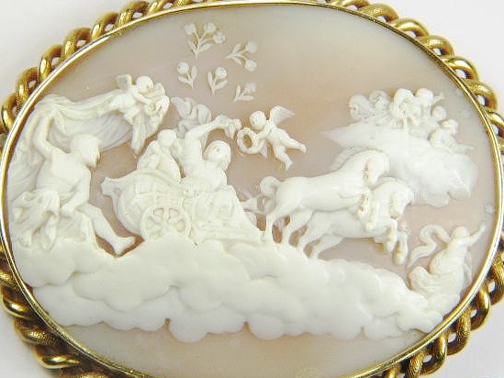 In simpler scenes Aurora can closely resemble Nike in her chariot, but the presence of one or more of her attributes, as well as the absence of any of those belonging to Nike, permit identification. Counting legs, it is evident the carver of the first cameo did upgrade her to four horses, an exception to the biga rule, while the carver of the second piece converted the torch usually carried by the Genius of Light to a horn, with which he trumpets the arrival of the new day. The carver of the fourth piece gave the torch to the goddess herself, dispensing with her attendant.

In addition to the clear cut examples shown above, there are other female drivers of bigas who are also routinely identified as Aurora/Eos, even by museums, about whom it is possible to make a strong argument for a different identification.  There are also figures commonly identified as Nike who may in fact be Aurora.