The term "hardstone" is a translation of the Italian pietra dura.  While it is used widely in the world of cameos, it is not used by gemologists or mineralogists, being, perhaps, too general and loosely defined.  Most of the materials comprised by this word are quartz in one of its many forms.  Basalt, while certainly hard enough, comes to the surface in volcanic eruptions, so is usually classed, when used for a cameo, as "lava". 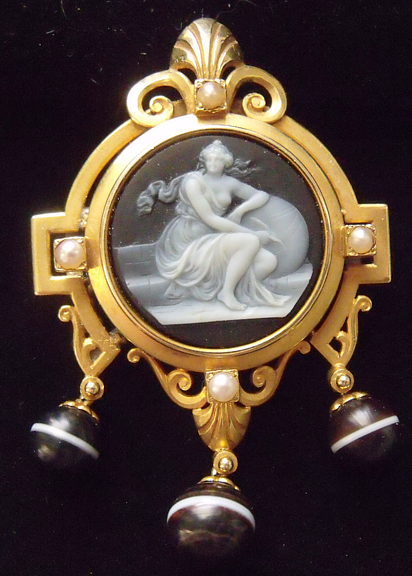 Most of the time, when we say "hardstone', we mean cameos such as this one of the Muse Urania (or perhaps, as the exposed breast suggests, Venus Urania) that have a figure or scene in one color raised above a background in a contrasting color.  A generic term for material of this type is "layer stone".  Another is "banded" or "layered agate".  The word "agate' comes from a river in Sicily known to the ancients as the Achates.  Sicily was long a source of the rough layered agate material highly desired by cameo cutters. (A beautifully illustrated, if awkwardly translated, extremely thorough treatise on Sardinian agate is available as a free pdf download from lulu.com.) 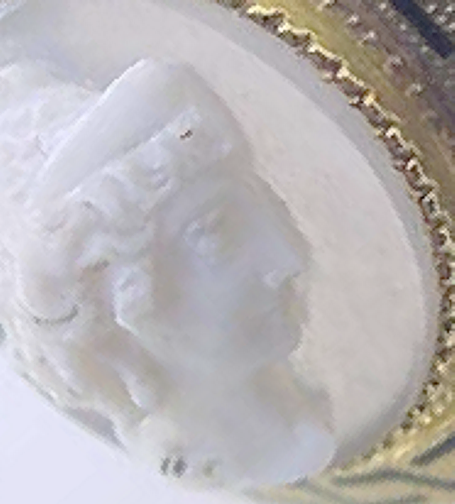 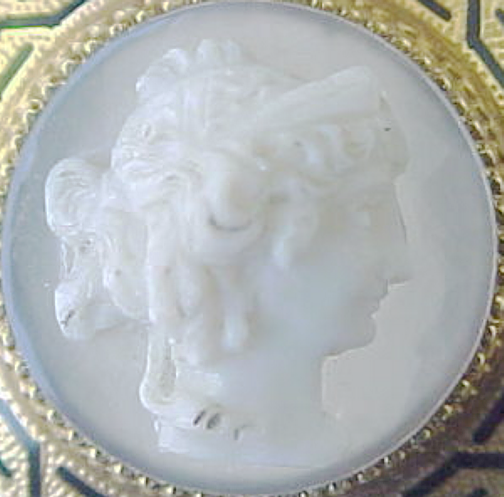 The principal constituent of agate is the microcrystalline quartz chalcedony.  In its purest form chalcedony has little color, varying from translucent white to pale grey or blue.  Highly porous, the color of chalcedony is readily altered by various means, some of which were known to the Romans.  According to Walter Schumann, in Gemstones of the World, chalcedony was worn by the ancients as a talisman against depression and idiocy.  They also carved it into cameos.

While there is no clear line dividing them, whether naturally occurring or treated—treatment is so commonplace jewellers rarely feel compelled to mention it—orange-red chalcedony is known as cornelian (in the U.S. "carnelian" is used more frequently); when it crosses the line toward a darker brown, as in the example above, it is called sard.  The word "onyx" derives from the Greek for "fingernail".  A cameo with a sard background and a white figure or scene that is translucent where the white layer has been pared down to just a breath on the surface is sardonyx.  A bit of an oxymoron, perhaps, but chalcedony that has been dyed black—it does not occur this way naturally—is commonly known as black onyx or, much of the time, simply as onyx.  Agate that has been tinted green is sometimes erroneously identified as chrysoprase or aventurine. 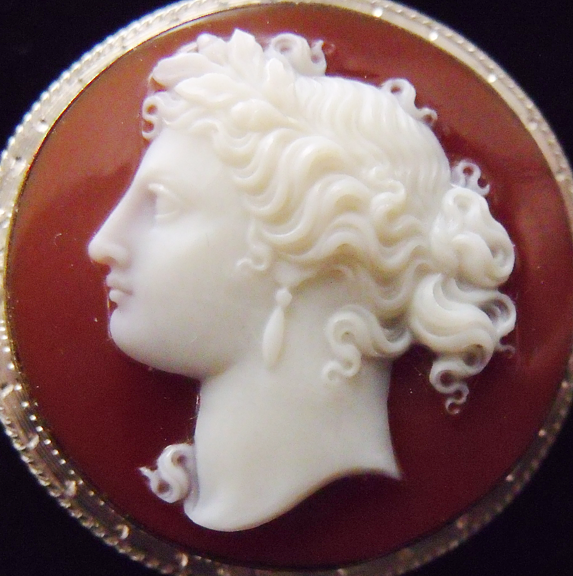 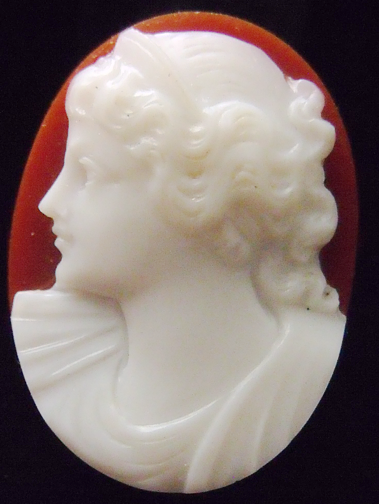 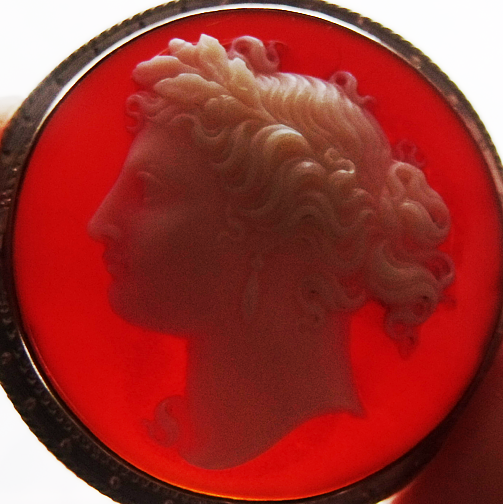 The two cameos above were almost certainly dyed to achieve the classic shade of cornelian red-orange.  With only these photographs to judge by, it would be very difficult not to suspect them of being glass.  Some additional clues are needed to make a proper assessment. 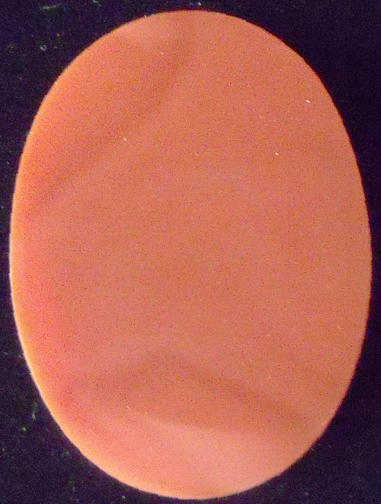 The nose and area around the eye of the bewreathed lady with the earring exhibits the translucence of onyx, allowing the cornelian to show through faintly.  This effect can also be achieved in pâte sur pâte glass, where the artist painstakingly applies layer after layer of glass paste to build up the design.  But she has another feature not seen in glass: the slight "aura" of the cornelian left around delicate areas such as the lips and tendrils of hair.

Her companion was cut with less finesse, but, despite the seemingly uniform color of the front, does show hints of layers when seen from the back.  And yet this too is sometimes seen in glass, so does not allow for a decisive determination.

The last place to examine is the line where the figure meets the ground.  Two-color glass cameos are made as two separate pieces which are then affixed together.  There is complete separation of figure and ground.  Sometimes it is even possible to catch a fingernail under the edge of the figure.  In many hardstone pieces the line between the white and colored layers is not absolutely level, the carver must then cut into the background layer to keep the figure at an even height, and this can be seen at the interface, in some spots more than in others.

The ringstone-sized cameo below looks very like the two above; she even has the chipped nose so characteristic of hardstone cameos that have been living in an actively worn ring.  But she is glass, constructed from two separate pieces.  The edges of the white figure do not run into the ground at any point nor does the ground rise to meet her.  A fingernail easily catches all around.  Such cameos turn up set in rings of low karat gold, the precious metal lending them credibility. 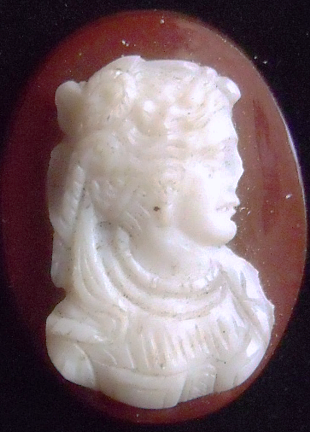 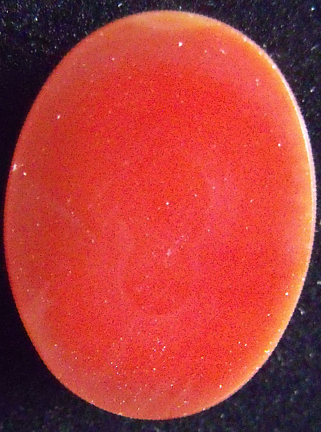 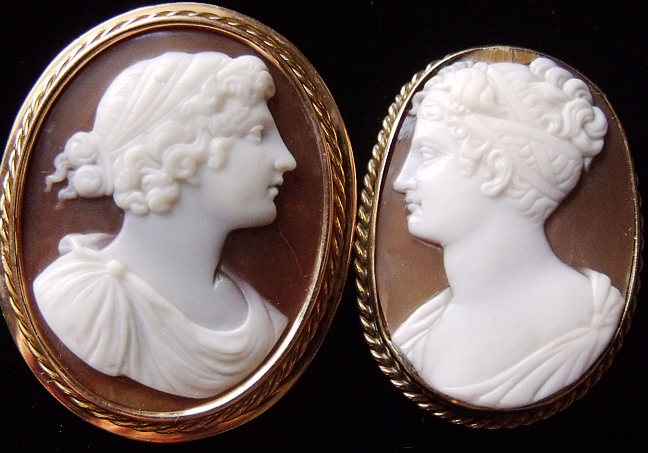 These ladies must surely be hardstone?  After all,  the background color falls within the range of cornelian, the white figures gleam like polished stone. The one on the right  has that "aura" of background layer by her mouth and under her chin, and both, despite their relatively large size, are so close to being flat the bezels do not follow the saddle shape usually required to accommodate shell cameos. 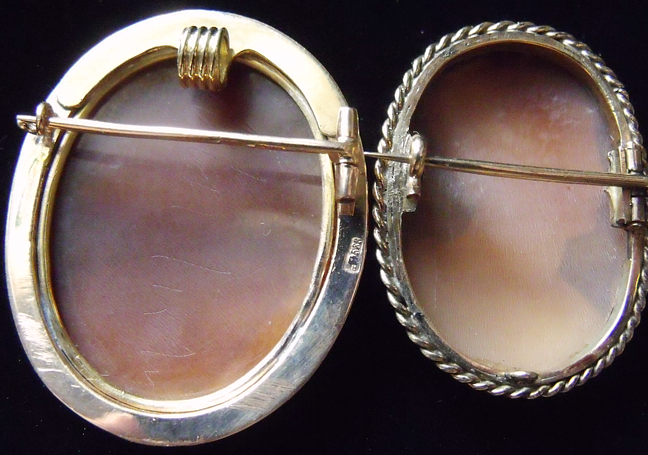 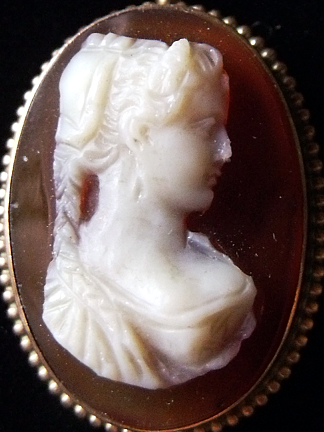 This is one of those cases in which photographs may not only fail to give the whole picture, but may be highly, no matter how unintentionally, deceptive.  Both cameos are helmet shell.  The translucency evident in the photographs taken from the back provides some evidence, but, depending on the thickness and color, hardstone can be nearly as translucent, as is the case with the hardstone maiden at right.  Most of the time carvers in shell do not polish the white portion of the work; these did so.  Most of the time a helmet shell cameo of any size would have enough curvature to require the bezel to undulate with its edges; these do not.  Their true nature is more readily discerned when in the hand: while the lady on the left was cut by Luigi Michelini in a section of shell so thick the weight is not perceptibly different from what might be expected of stone, the lady with her hair caught up in a sakkos is much lighter in weight than would be a hardstone piece of comparable size; the back surfaces are subtly concave.  When in doubt about a piece you are considering purchasing, it is advisable to inquire of the seller concerning weight for size and flatness/concavity of the cameo's reverse side. 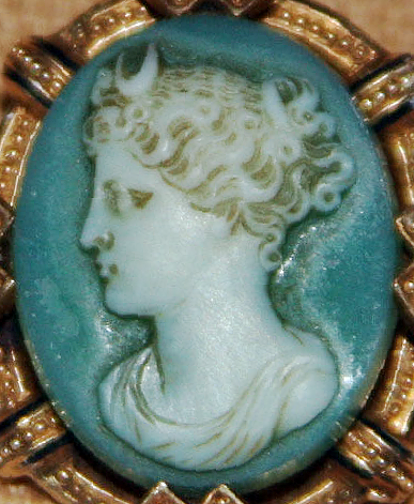 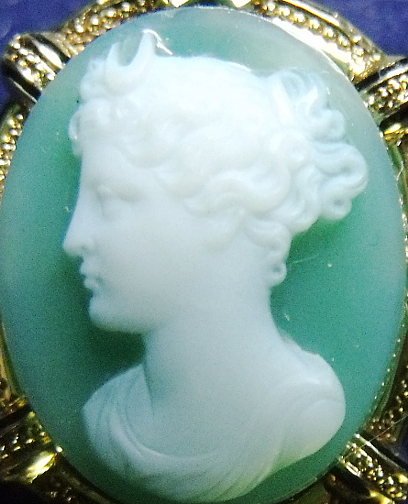 Offered for sale in such a grimy state, this little green Diana was not readily distinguishable from glass.  A bubble bath revealed her true, luminous appearance; an examination from the side confirmed her nature as agate. 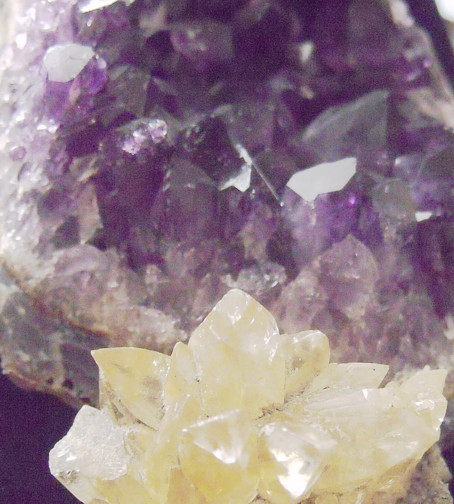 The quartzes most of us recognize are the large crystal varieties, named by color, such as the amethyst and citrine shown here.  These, along with smoky quartz, colorless quartz—"rock crystal"—and occasionally rose quartz, are sometimes cut as cameos.  However, their uniform color makes them better suited to being engraved as intaglios. 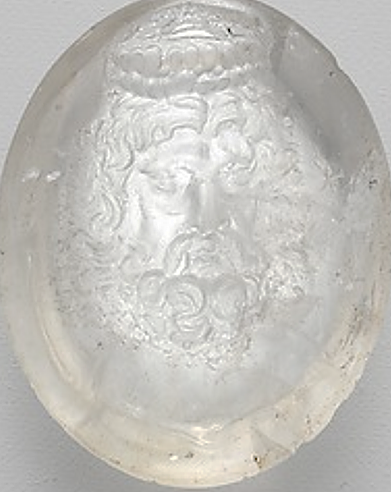 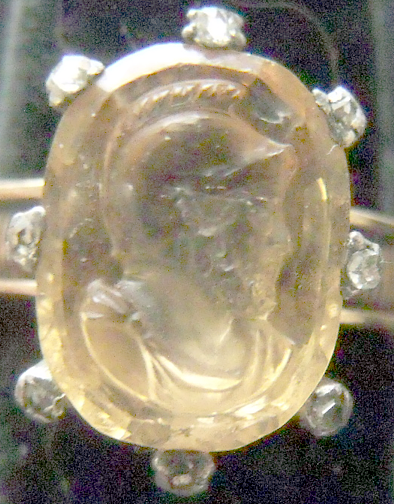 If one is going mainly by pictures, pieces such as the three shown above pose a couple of major questions:  How old is the piece?  Is it genuinely stone or is it glass?  The rock crystal Zeus-Serapis, in the collections of the Metropolitan Museum of Art, is as accomplished a work as anything done in our time; it dates to the 2nd or 3rd century C.E., as does the amethyst intaglio of the Emperor Caracalla, which was recut in the Byzantine period to convert him into St. Peter.   The citrine hero is set in a 14K gold ring and is surrounded by what are probably genuine, if tiny, diamonds.  One might therefore expect the cameo also to be what it appears to be.  However, it is molded glass.

There is nothing like carbon dating that can distinguish an ancient piece from a modern one.  Stone used by a gem engraver working today can be just as old as that used by the ancient Greek masters.  In the 19th century there was such a rage for collecting ancient gems, supply, unsurprisingly, grew to meet demand.  Gem engravers had always copied their predecessors.  Now some began to sign with famous names from antiquity and to insinuate specious provenances.  The uncertainty and lack of trust this engendered caused the bottom to fall out of the market and museum curators still argue over the age of some pieces.  Since the 19th century fakes are now themselves antiques, they have an interest of their own.  Our advice to those seeking genuine antiquities is caveat emptor.  Sites such as eBay and most auction houses take no responsibility for the accuracy of the description of an item as dating to ancient times.  It is better to work with an experienced and reputable dealer.

Since quartz and glass are both silicon based, a gem tester cannot always reliably differentiate between them.  Uniform color and freedom from inclusions are generally prized in gems, but, as long as they do not mar the piece, irregularities can be assets in cameos and intaglios, since makers of glass simulants typically do not copy the natural material so exactly.  Air bubble inclusions are a sure indicator of glass.  The "citrine" cameo above has facets around the face and on the back.  If it were natural stone, or even cut crystal, the edges where the facets meet would be crisp and sharp rather than blunt, which they are.  The entire piece is too soft and rounded to have been hand cut; the low relief figure in a concavity is a strong indicator of pressed glass.