There is a type of cameo seen fairly often, typically described as vintage/antique hand carved "lava" or "meerschaum", that is actually molded in what geologists call "dripstone", the calcareous deposit left when calcium carbonate-rich water dries.  Seashells are made primarily of calcium carbonate; limestone is made by the sedimentation of countless small shelled organisms that die, sink to the ocean bottom, and leave their tiny deposit of calcium to combine with the others, until time and pressure convert them to stone on the sea floor.

Sometimes the restlessness of the earth brings these deposits to the surface, where weather and running water reshape them into caves.  The icicle-like stalactites that hang from the roof of some caves, and their stalagmite counterparts on the floor below, are composed of dripstone.  Another way that calcium carbonate saturated water comes to the surface is in volcanically warmed hot springs flowing through a limestone substrate, such as the Fontaines Pétrifiantes of Saint-Nectaire, in the Auvergne region of France.  Just as cameos carved in lava are treasured souvenirs of Mt. Vesuvius and the buried Pompeii, cameos created using limestone laden water have long been brought back by visitors to cave systems, religious grottoes and to hot springs.

To create these pieces of what the French term calcaire pétrifié, the water carrying limestone particles is channeled over a structure resembling a ladder.  As the water flows down from step to step, the larger, heavier particles drop out; water reaching the bottom carries only the finest, lightest grains.  The mold is started at the bottom of the ladder so that the outer layer of the cameo is made of very fine grained material.  Once this layer has been laid down, the piece is moved up the ladder, gradually being filled in with ever coarser grained material.  (For a detailed description of the process, click here.)

As the piece dries, the material contracts & small crystals form.  This piece, still being made at Saint-Nectaire, shows the characteristic concavity on the back, which corresponds in outline to the figure on the front (the photo to the right of the one of the concavity has been reversed to make this correspondence easier to see) and is lined with minute crystals similar to those in a geode. 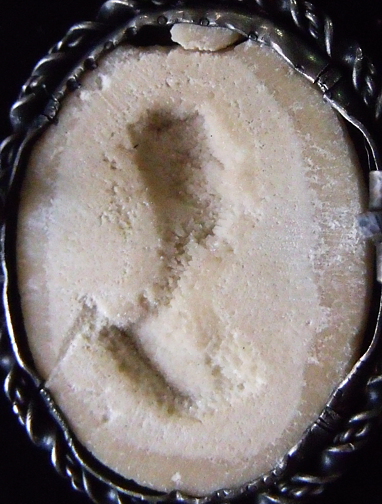 While the front is fairly smooth, the back surface is grainy and coarse.  Lava varies in the fineness of the grain, but each individual piece will have the same texture front and back; genuine hand carved pieces never display a crystal lined depression of this sort.

The tendency of dripwater to form calcite crystals as it dries leads to such pieces being more vulnerable to fracture than their lava cousins.  The piece shown above has lost some material from the top edge, not visible from the front, in what looks more like a spontaneous crumbling than the result of any trauma.  These require gentle and, to minimize discoloration due to skin oil, infrequent handling.  The material is highly porous, so care is needed when cleaning or exposing to any liquid other than plain water.  Given that each one started out as a limestone solution, care should be taken even with that, lest they return to their original state.  Although we have not seen a case of this, the calcium carbonate nature of dripstone may mean it is also vulnerable to "Byne's Disease". 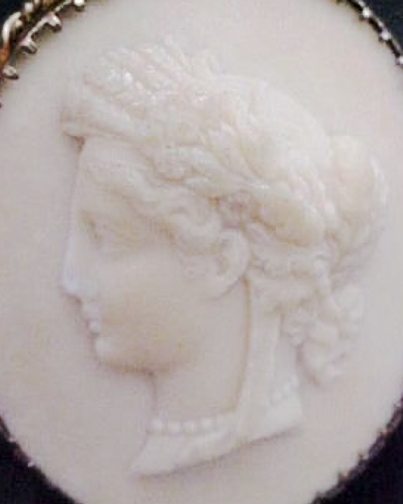 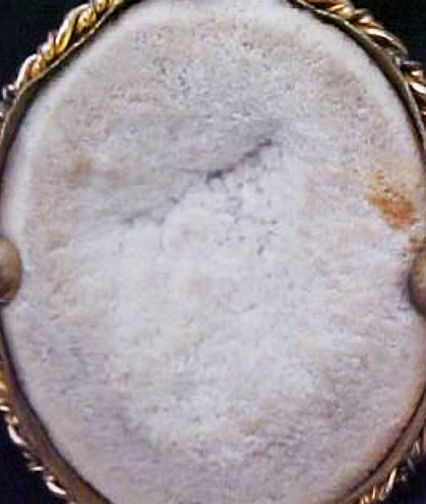 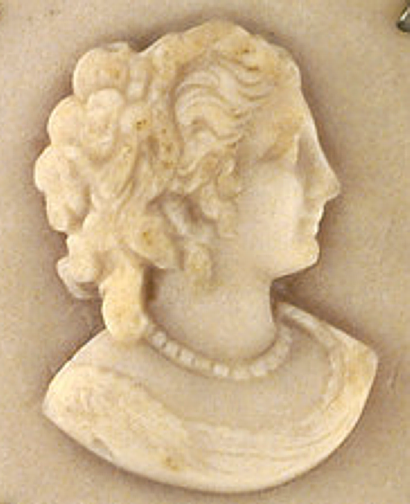 The deep crease on the back of the Ceres (far left) follows the line of the wheat stalk wreath on her head.  She has the name Reverchon at the truncation line; evidently the mold that produced this piece was taken from a work by that French family of gem cutters. 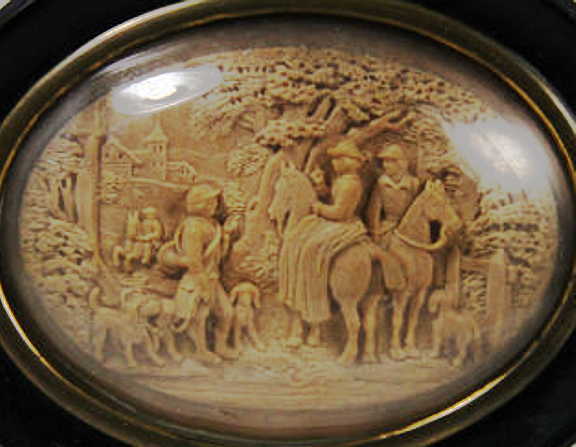 This elaborate scene, framed for hanging, was a souvenir from the extensive limestone caves on Gibraltar.  We know because the thoughtful traveler pasted a note to the back.

This cameo is formed from the water that drips from and forms the Stalactites in the Caves of Gibraltar.  Forming in an Intaglio Matrix, it takes about a month to form and harden one of this size. 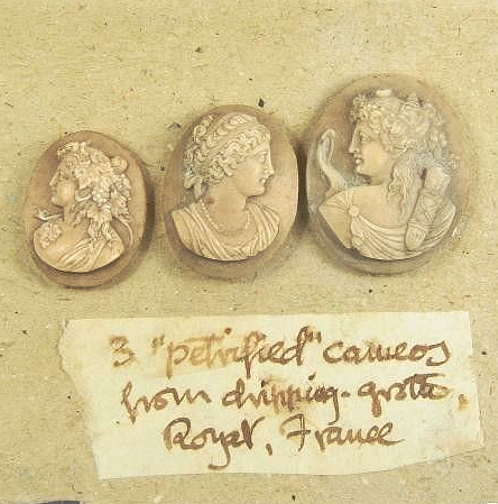 Gibraltar was not the only tourist attraction to offer dripstone mementos of your visit.  Here, a trio of beauties from the grotto in Royat, France.  Although Naples has an extensive system of caves, much enlarged by human activity, we have yet to see a dripstone specimen that could be positively identified as having originated in Italy.  Cameos such as these are not lava, they are not hand carved, and they are not souvenirs of Vesuvius or Pompeii.  Those with religious subjects seem to come primarily from France and are often misidentified as meerschaum or pipe clay. 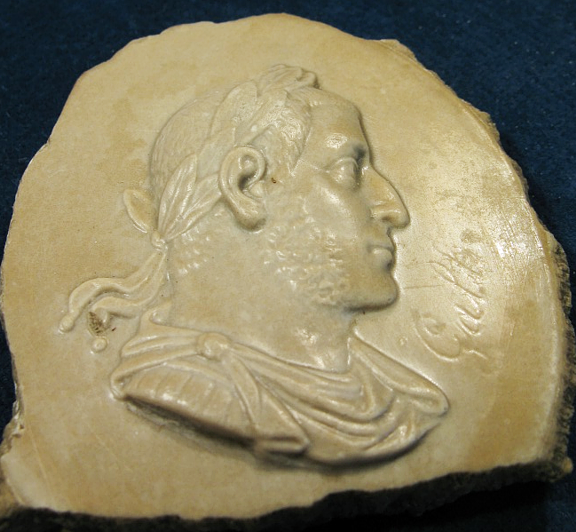 The Hunterian Museum of the University of Glasgow holds this portrait medallion of the Roman emperor Galba.  While they do not use the term "dripstone", they do describe the piece as calcite, the mineral of dripstone, and as a speleothem, the product of a cave.  A photograph of the back would undoubtedly show some degree of indentation.