The nature of so-called "lava" cameos is a vexed subject, still very much under investigation by the editors.  What follows is only the beginning of a more comprehensive article and our best understanding of the topic to date.  Readers with additional insight into these pieces are invited—implored—to get in touch.

What better souvenir to bring back from a visit to Mt. Vesuvius and the buried towns of Pompeii and Herculaneum than a cameo carved from a sample of the materials the irascible volcano spewed out in 79 CE, choking the inhabitants with toxic gasses and interring them under meters of ash?  We see many cameos offered for sale under the description "hand carved lava".  "Lava" is a generic term for any solid material produced in a volcanic eruption, and some pieces so described show signs of having been molded rather than carved.  This section will attempt to tease apart the cameos found in this category.  One of its imitators, "dripstone", is taken up in a separate page following this one. 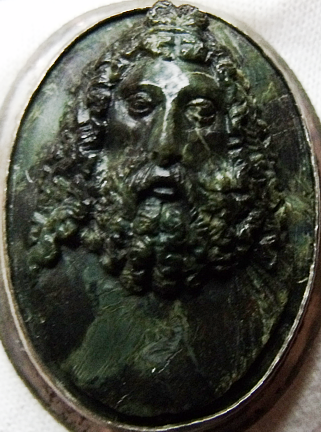 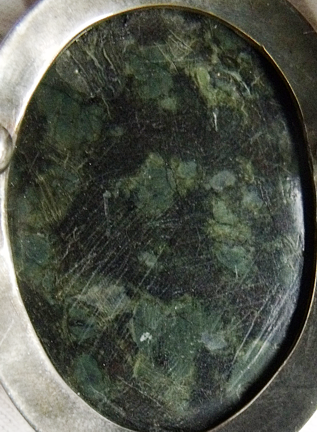 One of the materials volcanoes sometimes produce in great quantity is basalt, a hard, typically dark, fine grained rock with varying mineralogical composition, which may include olivine.  Basalt is the stuff of much of the Earth's crust.

This black and green cameo of Zeus fits the description of basalt.  Certainly its mottled coloration suggests it is natural, undyed stone.  The chisel scratches visible on the back attest to its hand manufacture.  The range of subjects seen with any regularity executed in lava is much narrower than those in helmet shell; Zeus/Zeus-Serapis is part of the lava canon.  Basalt cameos are sometimes misidentified as marble. 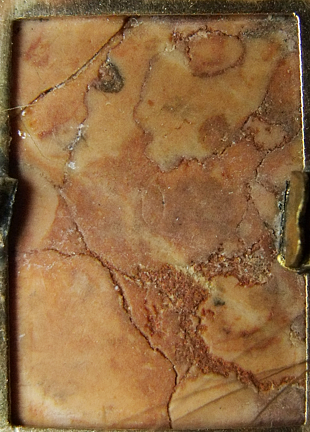 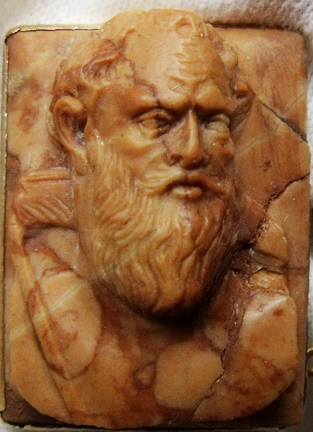 Another material volcanoes eject in explosive eruptions is known generically as "ash", fine mineral particles light enough to be carried on the wind.  Created when the blast pulverizes the stone in its way—in geologist's terms it is "pyroclastic"—along with larger chunks of rock it settles around the volcano, solidifying into "tuff" or "tufa".

The lighter color and relative softness of so many "lava" cameos suggest that they are this substance, so abundant around Vesuvius, rather than the tougher, darker basalt.  Saturn is another figure in the lava canon of subjects.  This scythe bearing gentleman who has fissured in places along fault lines created by discrete clumps within the aggregated material is probably of this second type.  The variegated color shows the piece has not been dyed; its lack of uniformity argues that it was carved, not molded.

The presence of undercutting, the removal of material so that the figure has some separation from the ground, is a good indicator that a lava cameo has undergone shaping by the use of hand tools.  It is not a guarantee that the entire piece has been executed by hand.  When the degree to which a piece has been worked in this way is extreme, when the carver has gone beyond outlining a profile to cutting his figures in such high relief that in places they are semi-detached from the background, it is safe to say the piece is hand carved.  The two examples below are carved in solidified volcanic ash and were quite likely dyed to even out the color. 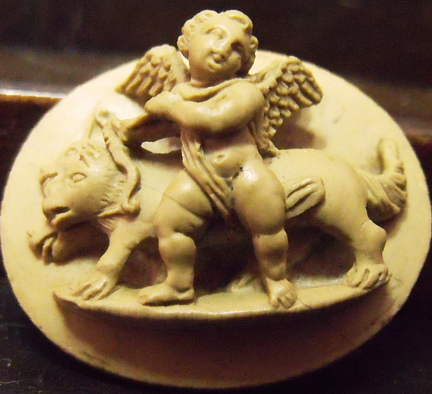 Modeled on Bertel Thorvaldsen's Cupid in the Underworld, the clever scamp is using his bow to yoke the three heads of Cerberus, the great hound who guards the portal to the realm of Hades.  Here the carver has cut away as much as possible while still giving the piece enough stability to survive careful wearing. 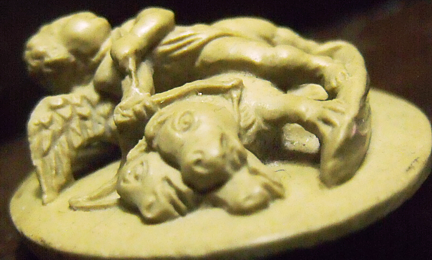 With her goat familiar, this bacchante was not given quite so much definition by the maker, but it is still more than adequate to provide assurance of hand carving. 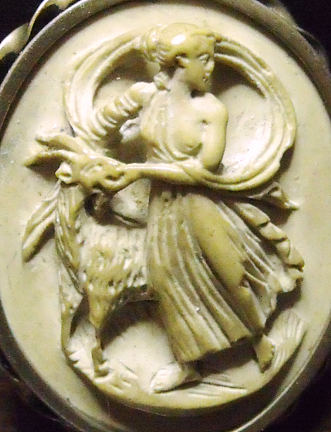 This cameo of Saint Joseph below—in case we did not recognize him by his flowering staff, the carver has considerately etched his name, S(anto) Giuseppe, on the back, something seen fairly often on lava cameos but not on cameos in other media—is in even lower relief, although there is a bit of air space beneath the head of the staff.  Other points indicating carved lava: chisel scrapes to the back; detailed carving of the face when seen from the side; background layer squared off so that the edge is perpendicular to the front and back surfaces; and the ragged appearance of the chip on the edge.  The lighter color the chip reveals this piece was dyed. 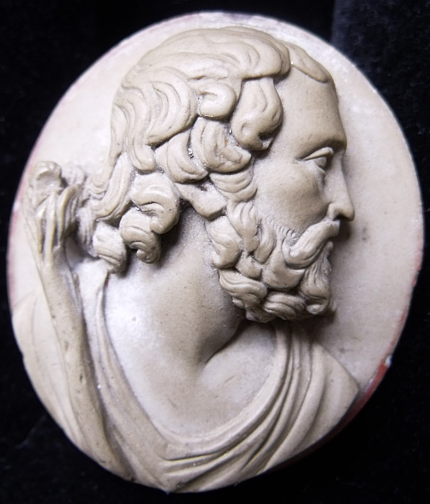 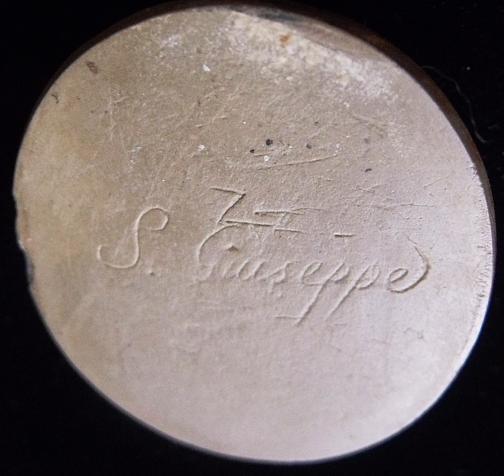 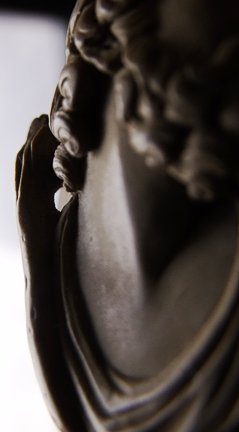 Although most pieces do not have the semi-detached elements that lead to a confident identification of carved lava, they can still be carved in a manner that, taken with other signs, indicates they are also hand worked volcanic material.  The sharp, incised lines of this cameo of Cybele/Tyche would not be seen in a molded piece.  The scoring to the crown of the head could have been added as a finishing touch to a molded piece, but the raised turrets of her mural crown could not have been created by a rigid mold. 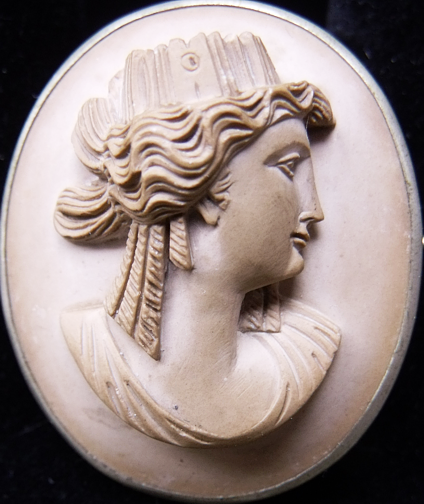 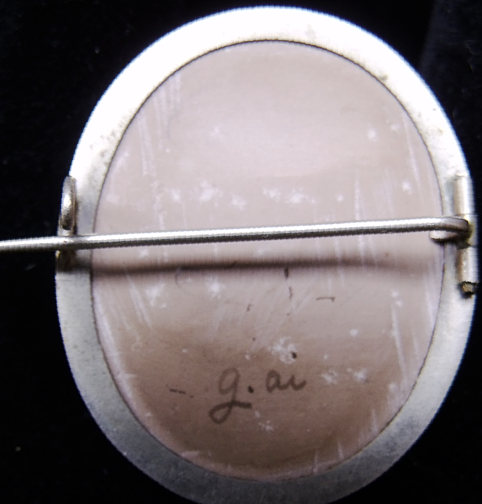 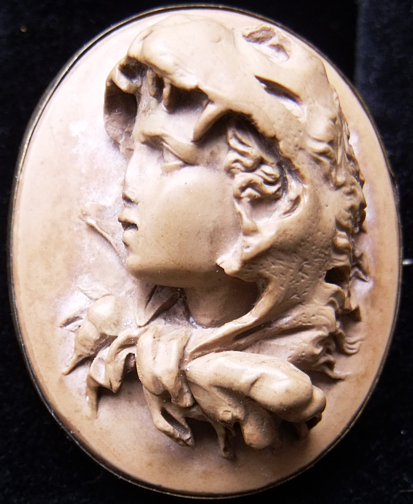 Omphale has lost some of her nose and some of her color, but the wildness of her mingled mane/hair and the definition around the lion's mouth and teeth are clearly hand work.   The indentation below her lower lip is by itself good evidence for the craftsman.

This little plaque of a praying boy was offered for sale as lava.  However, it is noticeably lighter in the hand than would be a genuine lava piece of the same size.  The back gives the game away: the embedded wire hanger had to have been placed while the material was liquid.  Additional evidence for the true nature of the piece was given accidentally when the plaque was knocked to the floor: not only did it not so much as chip, it bounced.  Although the material is undoubtedly a modern synthetic, the mold used to cast it may have been made from a genuine lava carving.  However, the one thing he is not is lava.

The French make plaques, frequently religious subjects for personal devotions, in white materials that are variously described as meerschaum, pipe clay, chalk, calcaire pétrifié (see the section on limestone) or carved plaster.  Alabaster and soapstone are also sometimes proposed as the material used.  As far as we have been able to determine to date, more than one material is employed in their making.  Some do seem to be actual meerschaum; these are very light in the hand.

When in doubt over an on line purchase, ask questions, request more photos, make sure the transaction carries some sort of buyer protection.